I just love wide expansive landscape views that include close foreground interest, as well as distant detail... sadly though, the combination does not always come easy.

Wide angle lenses are an important part of the landscape photographer's kit, but finding a good one, I mean a "really good one!" is not that easy. Curvilinear Distortion (straight lines don't stay straight) and Chromatic Aberration (colourful light bleeds around the edge of high contrast edges) are just two foes that the wide landscape photography shooter must battle.

Yes wide angle lenses have got better and some are real standouts, but even if a newer lens controls Curvilinear Distortion and Chromatic Aberrations well, there is still the issue of DOF (or 'Depth Of Field' ie. How much depth there is to the focus or sharpness of objects within an image).  So just how does one keep close foreground objects in focus, while still maintaining acceptable sharpness in the distant background?

On a regular wide angle lens this is done by using a small aperture (big f number) and hyperfocal focusing. "Hyper what?" I hear you say... well I will talk more about hyperfocal focusing in another blog, but for now, lets just say that every lens, regardless of focal length or aperture used, has various "focus sweet spots". These sweet spots (focus distances), when coupled with a particular aperture, will provide DOF from near to very far.

To help explain, let's think about DOF for a second... imagine DOF to be an invisible vertical wall, that is built upon the point that we have focused on. Use a wide open aperture (small f number) and that wall will be very thin, perhaps only a 1/2m deep for example. Anything in front of the wall will be out of focus and anything behind the wall will also be out of focus. As we close down the aperture to a smaller one (remember this is a bigger f-number) DOF increases, or our wall becomes much thicker. 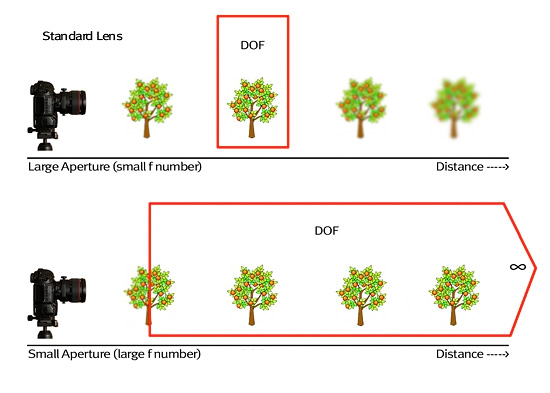 "That's simple then, let's just stop our lenses down to their smallest aperture and get the most DOF we can… problem solved!"

If only it was so simple.

Unfortunately, stopping a lens down can come at a cost. That cost is a loss in image sharpness due to diffraction. As light passes though a small aperture, some of it is diffracted (bent) and this diffracted light is recorded as softness in your image. The amount of softness produced will vary from lens to lens, so some lenses may work well with smaller apertures where others may not. (To find out what your lens does, shoot the same scene with each aperture on your lens and then view your results at 100% size on screen)

So does this make our wide angles lenses useless for landscapes?

Of course not, many MANY great landscape IMAGES have been shot with regular wide angle lenses... but that doesn't mean that there isn't a better way.

What makes a tilt shift lens so special for landscapes is that it has movements. The lens can "shift" from side to side or up and down independently from the camera. The lens can also "tilt" and make the light approach the camera's sensor at an angle.

The red line indicates the normal centre line of the lens and helps to highlight the movements.

Tilting the lens off its axis has a profound effect on it's focal plane. Remember the invisible wall? To create a deeper DOF or a thicker wall, we used a smaller aperture...

In this very simplified view, you see that closing the lens down to a smaller aperture has resulted in the DOF coming closer to camera, as well as extending into the distance.

But if a tilt lens is used, it has the effect of laying the DOF down in a wedge shape...

Once again this is a VERY simplified graphic, but it displays how we are now achieving a very deep DOF without the need to use a smaller aperture. This does not mean that we can shoot wide open and have everything sharp however, as the wedge will vary in thickness (mostly in the vertical) with aperture just as our wall did.

It does mean however, that larger more open apertures can be used to avoid diffraction, while still achieving effective DOF from near to very far.

(For the REALLY technically minded, I will mention that this laying down of the focal plane is called the "Scheimpflug Principle" and much, much more can be learned via Google.)

So how does this work in practice?

Pretty darn well actually! Take this image as an example... 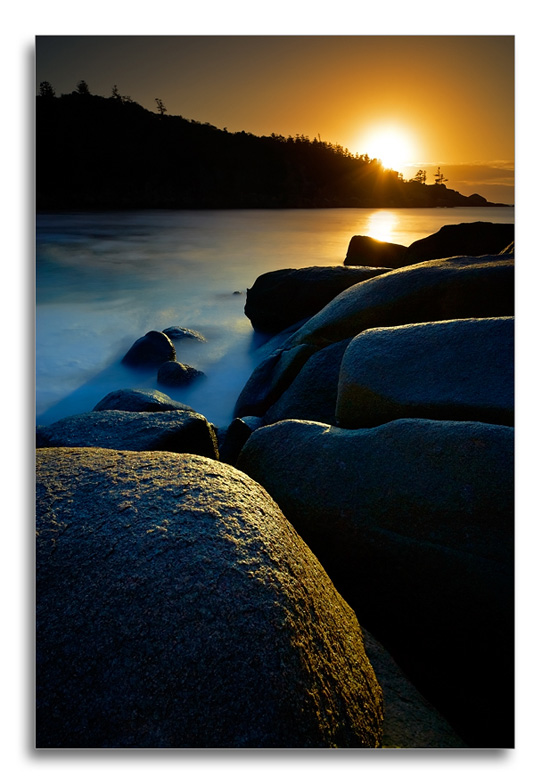 The foreground rocks were only about 30cm from the lens, yet focus extends from them to the horizon. Because I was so close to the rock, this image required 6 degrees of down tilt and quite simply, I could not have done it with any other lens in my kit without shooting multiple images at different focus points and then stacking them together later in post production.

The following image is taken from a standing height, so much less tilt of only about 1/2-1 degree was required to lay the focus plane/DOF area down. 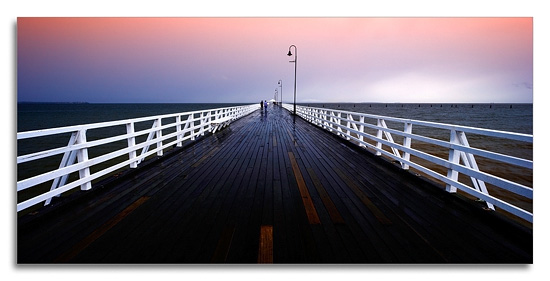 So what are the pitfalls of using this kind of lens?

Well personally I have found a couple. Using tilt can require very fine adjustments, as little as 1/2 a degree in some cases and these can be VERY difficult to see in the view finder of a DSLR.

Live view is one way around this, but sadly my current camera does not have live view. A magnified angle eyepiece is another good aid, as this will give a view around 2.5x the size of a standard view finder, but I don't find them the easiest thing to work with, as the 90 degree angle is not always convenient.

My best solution so far has been to practice. I now have a fair grasp on how much tilt to apply for any given height that I am shooting from. This is still not the perfect solution, as it is effected by camera angle, but until my new camera with live preview and perhaps even a feed to my iPad becomes available, it will have to do.

My other main issue that I have to contend with is "Me".

When swapping the camera from portrait to landscape orientation, I will often forget to rotate the lens so that tilt is in the right plane. This of course leads to disaster, with vertical planes of focus running through images that require horizontal, or visa versa.

To combat my ever increasing memory issues (I'm getting old you know), I have taken on the pilot's practice of vocalising a small check list whenever the camera is repositioned. I may look like easy prey for those playing "Spot The Looney".... but running through a checklist does seem to work for me.

So there we have it.... "Using Lens Tilt for Landscape Photography". A very basic tutorial, but one that should give you a fair understanding of what tilting the lens can do for focus.

Please contact us if there is a particular subject that you would like covered and either Bernie or myself will do our best to answer in a future blog post.